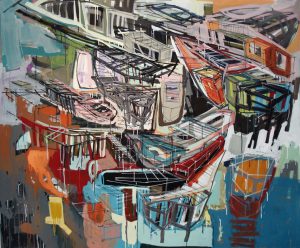 Trinidadian Canadian artist Denyse Thomasos (1964-2012) produced a remarkable body of work in her short lifetime. She is known for her epic paintings, and her achievement lies in her ability to manage social and formal elements in complementary proportions. For Thomasos, the social is concerned with the diasporic passage of African people and the conditions they endured both in transit (on slave ships) and on the lands (plantations) where they were indentured. Formally, her skillful use of colour and line has left us with paintings that carry dizzying degrees of energy and sadness, stasis and hope, representation and abstraction.

Shortly before her passing, Thomasos wrote in her artist statement:

I was struck by the premeditated, efficient, dispassionate records of human beings as cargo and also by the deplorable conditions of the slave ships – so many Africans stacked and piled into the tiny, airless holds. In my artworks, I used lines in deep space to recreate these claustrophobic conditions, leaving no room to breathe. To capture the feeling of confinement, I created three large-scale black-and-white paintings of the structures that were used to contain slaves – and left such catastrophic effects on the black psyche: the slave ship, the prison, and the burial site. These became archetypal for me. I began to reconstruct and recycle their forms in all of my works.

Organized by the McMichael Canadian Art Collection, this exhibition features work from every phase of Thomasos’ international career, from her early years as a student in the University of Toronto’s BFA program in the mid-1980s to her tenure at Rutgers, where she served as an influential professor.