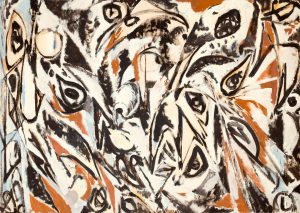 Like an intriguing tapestry, the history of art is woven with tales of powerful patrons and art collectors. Their influence in art circles and their communities can be profound. Such is the story of Richard E. Lang and Jane Lang Davis, whose collection was gifted in their honor to Seattle Art Museum by their foundation.

The Lang Collection, assembled in just over a decade beginning in the 1970s, includes landmark works by American and European artists of the postwar period including Francis Bacon, Lee Krasner, Cly  ord Still and Alberto Giacometti (all first acquisitions for SAM), plus Philip Guston, Joan Mitchell, and others.

Postwar New York City was a cauldron where experimental jazz, art, poetry and philosophy coalesced, and American artists established identity with a raw, emotive style of painting called Abstract Expressionism. Traveling to New York, the Langs engaged deeply with artists (some first-generation European immigrants) and art of the era to assemble one of the most iconic private collections of Abstract Expressionism on the West Coast. They filled their home on Lake Washington with significant paintings and sculpture. In addition to 19 works dating from 1945 to 1978, Frisson includes portraits of Jane Lang by Andy Warhol and Richard Lang by Alice Neel that were previously gifted to the museum.

The Lang Collection honors the late collectors whose generous and dedicated philanthropy spanned the visual and performing arts of Seattle, and helped to anchor the cultural life of a growing city. Lucky for us, the frisson – thrill of excitement – that drove their impassioned collecting will resonate for generations to come.