Home Riopelle: The Call of Northern Landscapes and Indigenous Cultures

Riopelle: The Call of Northern Landscapes and Indigenous Cultures

Most viewers associate Québécois artist Jean Paul Riopelle (1923-2002) with the large abstract paintings that brought him international acclaim in the 1950s and ’60s. Before that, he was a student of Paul-Émile Borduas and a member of the Montreal-based, Surrealist-influenced group of artists known as les automatistes. Riopelle moved to Paris in 1947, where he evolved and perfected a distinctive action-painting style, his medium applied with a trowel in thick wedges of colour often likened to mosaics. He returned to Quebec part time in 1972, and his subsequent paintings, drawings and sculptures, supported by images, objects and archival materials that influenced this work, are the primary subjects of an important exhibition on view this winter at the Audain Art Museum in Whistler. 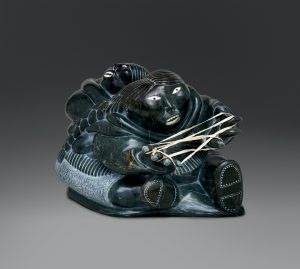 Organized and circulated by the Montreal Museum of Fine Arts, Riopelle: The Call of Northern Landscapes and Indigenous Cultures introduces us to a period in which the artist experimented with form and medium, travelled often by small plane to northern Quebec and the Arctic, and looked closely at the Indigenous art of British Columbia, Alaska and Nunavut.

AAM director Curtis Collins observes that there is a move in Riopelle’s work of the 1970s “towards more recognizable imagery but away from colour, two interesting reversals from his abstractions of the ’50s and ’60s.” Paintings on view include black-and-white interpretations of northern landscapes featuring icebergs and the midnight sun. At the same time, Collins continues, other works in the show reveal influences of Inuit culture and Northwest Coast First Nations masks, a lively selection of which surround and “thicken” our understanding of Riopelle’s oeuvre. Not incidentally, they also establish critical links to the AAM’s permanent collection of historical and contemporary Indigenous art.